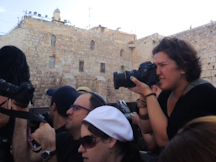 Sarah Schuman is a freelance photojournalist born and raised in New York.  She holds a bachelors in Culture and Communications from Ithaca College and received a one year certificate at the International Center of Photography in Documentary and Photojournalism in New York.

Sarah is currently based in Israel, where she lives with her family and works on individual projects.  She is available for assignments both domestic and abroad.  She has been published in; The New Yorker, The Riverdale Press, Times of Israel, Jewish Press, among a few others.